"Be The Change You Want To See In The World" 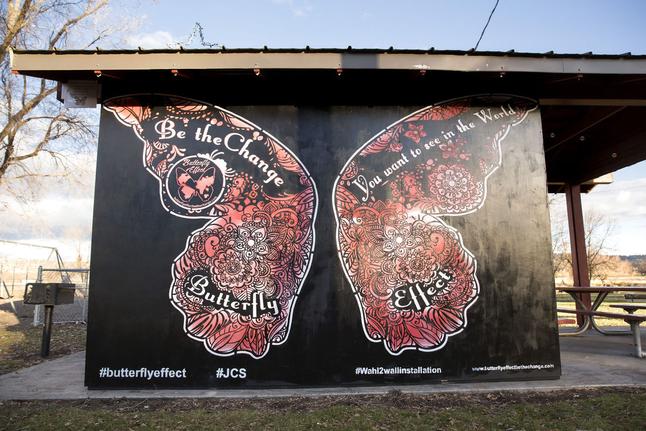 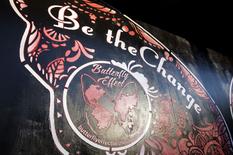 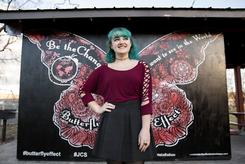 Did you know that the Town of Bonanza is the first Town or City in the State of Oregon to have the world wide movement called The Butterfly Effect?  Yes we are!  The Butterfly Effect mural is proudly on display at Big Springs Park in Bonanza.  Its’ 8 foot by 12 foot detailed mural painting captures the eyes of all who pass.  But how did it end up in Bonanza and what is the meaning behind it?

It all started with a bright and talented Bonanza High School senior, 17 year old Brooklyn Cunningham.  During a mission trip to San Francisco to feed the homeless in February of 2017, this student came across a large butterfly mural that instantly caught her attention. Once she heard the story behind the mural, it captured her heart as well.  She saw a very detailed and beautifully painted 8x12 butterfly with the encouraging words painted therein which said “Be the change you want to see in the world.”, which are the wise words of Mahatma Gandhi.  While the large wings of the butterfly were displayed, the body was left out so that those who saw it, would stand as the body of the butterfly, spread the pictures taken and spread the word of the Butterfly Effect.  The worldwide movement, established in 2013 by artist Tasha Wahl, encourages everyone around the world to do small random acts of kindness, which she chose to do through art. While pursuing such kindness by placing the large butterfly wings mural around the globe, nearly 210 charities have raised to date over $60,000 all thanks to The Butterfly Effect.

The Butterfly Effect movement is based on the idea that even the softest flutter of the wings of a butterfly can affect the molecules around it thereby setting off a chain reaction that can change the world.  It sets an immeasurable goal to inspire others to commit random acts of kindness, no matter how small, which is something everyone can be a part of.

So when Brooklyn Cunningham was feeding the homeless in California, she fell in love with the concept of the movement.  She entered               a contest hosted by the organization which entailed writing an essay explaining why her hometown, the Town of Bonanza, should be a recipient of one of butterfly murals that are seen around the globe.  In her essay, she mentioned where the mural would go if received         and    why she felt the Town of Bonanza should win such a special butterfly. Brooklyn explained that as in every town, there are small problems     here and there and that she felt that her generation isn’t as loving and peaceful as others have been.  She felt that such a mural, with such     a positive message, would show beauty and create peace and acceptance.  Low and behold, Brooklyn won and was the recipient      of a large butterfly stencil!

Although it took some time to get the stencil, get the supplies and gather up the help needed to put this project in motion, Brooklyn remained excited and very willing to do what needed to be done to get the large mural painted and on display in Big Springs Park. With the help of locals, Brooklyn was able to complete the project in late November of 2017.  While picking the Bonanza High School Colors, red white and black, for  the mural’s colors, she along with her sister, Madalyn, and a couple of close friends, dug in and began painting the very detailed stencil of      an 8x12 butterfly. What an amazing job these young ladies did!

So when you are driving through the Town of Bonanza, stop by Big Springs Park and take the time to see this beautifully painted butterfly,  take a picture with it, spread the message and most of all, “Be the change you want to see in the world. “  Remember Brooklyn Cunningham’s journey to get The Butterfly Effect to our town and do something nice for someone today, no matter how small.  We thank Brooklyn for          her amazing story and the story she has now brought to the Town of Bonanza, State of Oregon.

For more information on The Butterfly Effect, visit their website at butterflyeffectbethechange.com.